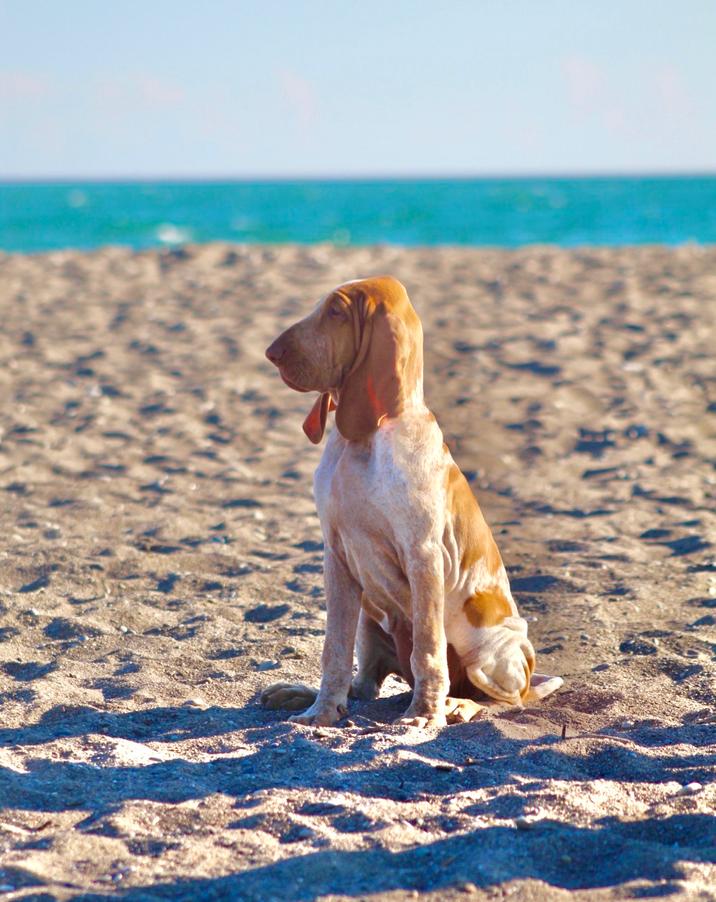 We welcomed our first Bracco Italiano in 2022. A beautiful Hungarian import from You Can Kennels in Budapest. I’ve spent many years dreaming of this breed and couldn't be more excited to have our first come from such a fantastic breeding program.


The Bracco is a hunt, point, retrieve gun dog. Originally the breed was used to drive birds into nets but as hunting methods changed and with the development of guns the Bracco’s working style has adapted.

hunt point retrieve gundog the Bracco Italiano is of an ancient and noble lineage, he is mentioned in writings of the 4th and 5th centuries. The Bracco has been accepted as a distinct breed in Italy since the Middle Ages. He was bred by noble families such as the Medici and the Gonzaga; dogs from their kennels were much sought after. So highly prized was the breed they were deemed suitable gifts for royalty, records show the Court of France was given chestnut Bracchi as a gift in 1527. The breed became widespread during the renaissance period when hunting feathered game was a highly regarded and exclusive sport of the Italian aristocracy.
The late 19th early 20th century saw a decline in numbers but due to the enthusiasm of breeder Ferdinand Delour de Ferrabouc (1838-1913) the Bracco was saved from extinction, he was also responsible for the first drafts of the breed standard. The definitive breed standard was approved by ENCI in February 1949 and nine months later, in November, the Societa Amatori Bracco Italiano, SABI, was founded.

The origins of the breed are unclear but it is believed to have been developed from the Egyptian hound and the Mollosus or Persian Mastiff. The white and orange is thought to originate from the Piedmont region ‘Piedmontese Pointer’ and was a lighter smaller dog thus enabling it to work more easily this mountainous region. The white and chestnut came from the Lombardy region ‘Lombard Pointer’ and was a heavier taller dog. Over time the two types were combined to create a breed of more uniform size although you will still see today dogs of a heavier and a lighter construction. The Bracco can be found behind many of today’s gundogs.
Originally the breed was used to drive birds into nets but as hunting methods changed and with the development of guns the Bracco’s working style has adapted. In 1937 the Working or ‘Pastrone’ Standard was drawn up (the working standard can be read HERE), this standard describes beautifully the physical and mental working style of the Bracco.